Sanjiv and Jayshree's wedding in Jaipur was high on the fun factor with cool themes and heady drinks.

Jayshree and Sanjiv first met at a mutual friend’s wedding little knowing that it would lead them to tie the knot one day. Their nuptials at Fairmont Jaipur were beautifully captured and orchestrated by WeddingSutra Favourites – Dipak Studios and Krayonz Entertainment respectively. The team at Dipak Studios encapsulated all the beautiful memories in dramatic frames whereas Krayonz Entertainment added a touch of magic by transforming their dreams into reality. Take a look at some of the festivities and highlights shared by bride Jayshree .

“Sanjiv was born and brought up in Barcelona, Spain, and I moved to Mumbai after residing in Manila, Philippines, for a couple of years. As fate would have had it, we bumped into each other at a mutual friend’s wedding in Mumbai, and from the time we were introduced, we haven’t stopped talking. We exchanged numbers and grew closer over texts and calls. A few months into being friends, we met again in Mumbai, and it felt as if everything was falling into place. I then decided to go on a trip to Europe with my family, and one thing led to another, and we were suddenly at a family dinner with both our families getting to know each other. After a few weeks, he flew down to Mumbai and asked me to marry him.”

The couple followed the theme of ‘Shades of Love’ for the pool party and incorporated colorful elements in the decor by the poolside. The duo made a stunning entrance in vibrant outfits. She wore a yellow, pink and turquoise lehenga with heavy sequins work by Preeti S Kapoor, and he looked dapper in a floral kurta and a red jacket by Prima Czar. They were welcomed by color bombs and traditional drummers, as they made an entry riding a cycle rickshaw decorated with flowers. A flower backdrop with a polka-dotted scooty served as the perfect backdrop for a photo booth. There were mehndi stalls, bhangra dancers, a sheesha corner and tarot card readers to make this function a memorable one. They also had a cart full of giveaways such as bangles, bandhani dupattas, and clutches for the ladies.

Following the theme of ‘Turkish Razzmatazz,’ Krayonz Entertainment transformed the entire venue into a Turkish haven using blue and silver crystals which were suspended from the ceiling. There were two ladies in traditional Turkish outfits welcoming the guests with flower petals and rosewater sprinklers, and four women dressed up as police taking rounds and giving shots to the guests as penalties. The couple danced the night away, and Jayshree looked fresh in a pastel green sequined gown by Dolly J, and he wore a bandhgala by Prima Czar for this fun event.

Their wedding had a red and gold palette, and the venue was shining bright with roses and candles everywhere. Their pheras were held at the rooftop, where high-tea was served. They had called for seven pandits to chant their wedding vows together in synchrony. Jayshree looked beautiful in a red lehenga by Shyamal and Bhumika, and Sanjiv looked equally dashing in a white sherwani with a red stole by Prima Czar.

Their reception was nothing short of a grand affair. The venue was decorated with white satin drapes exuding royalty. There was a ‘paanwala’ (betel leaf seller) offering a delectable range of paans to the baraatis. They soon went into a merrymaking mood with nitrogen cookies, alcohol shots with smoke guns, and diverse flavored shots curated by Drinq. The newlyweds entered on a white carpet, and Jayshree looked lovely in a powder pink gown with a long trail by Val Taguba, and Sanjiv opted for a black, asymmetrical bandhgala by Shantanu & Nikhil.

“Always remember that your guests come first, so make sure you put a lot of effort in hospitality. I got so many compliments on my wedding, thanks to my hospitality team. Achint Nag from Krayonz Entertainment took good care of all my guests and were also by our side, taking care of all our needs from morning to night.” 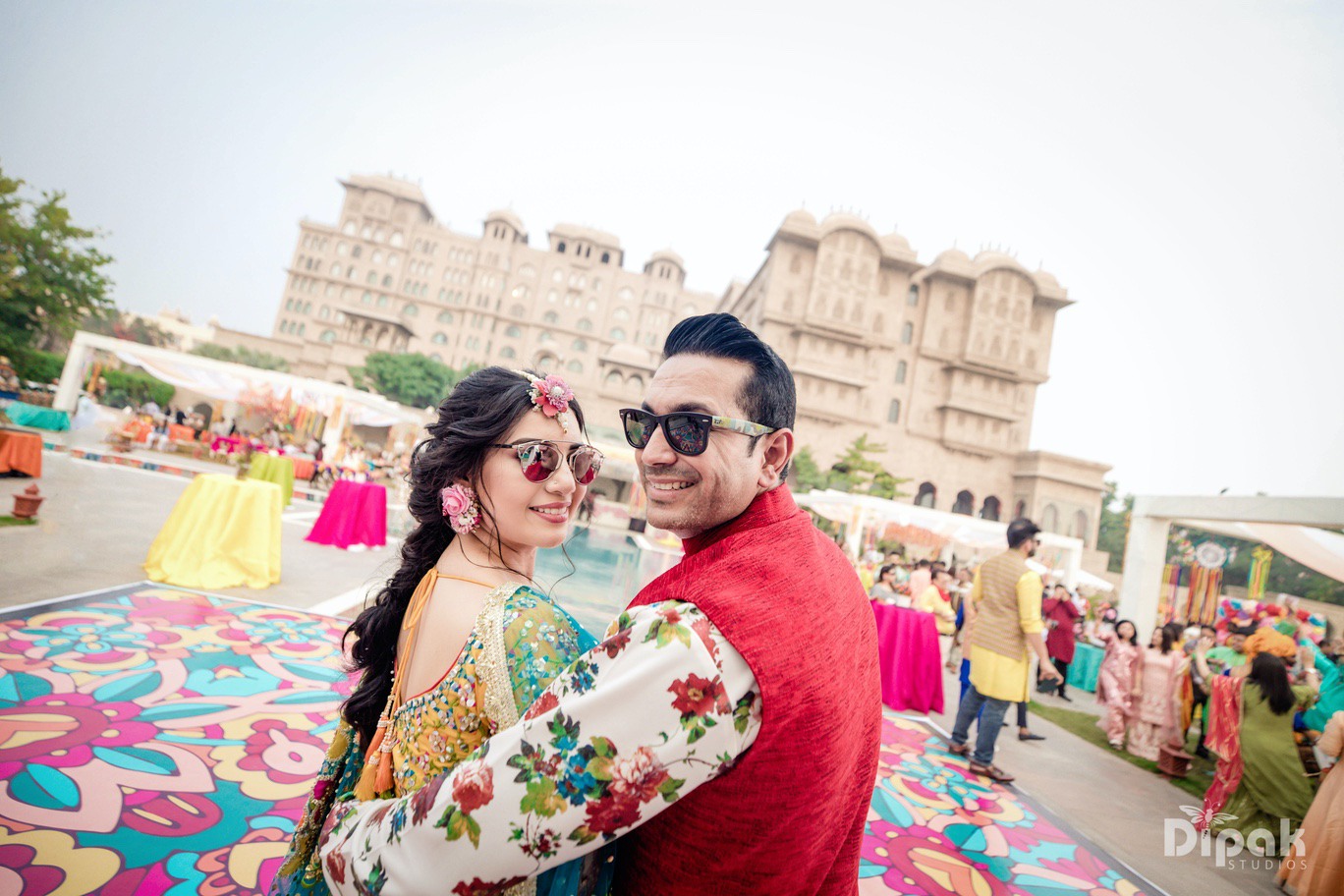 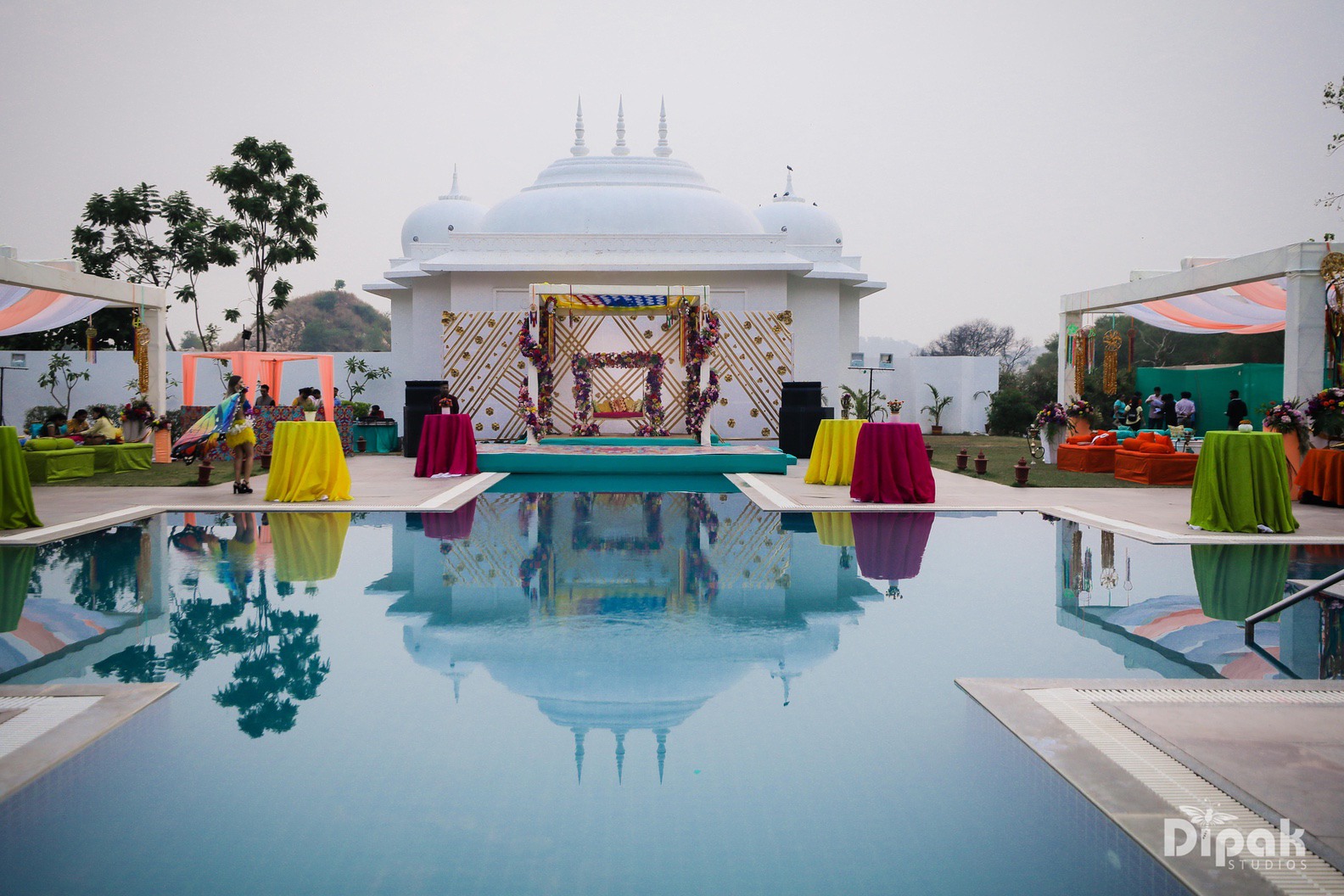 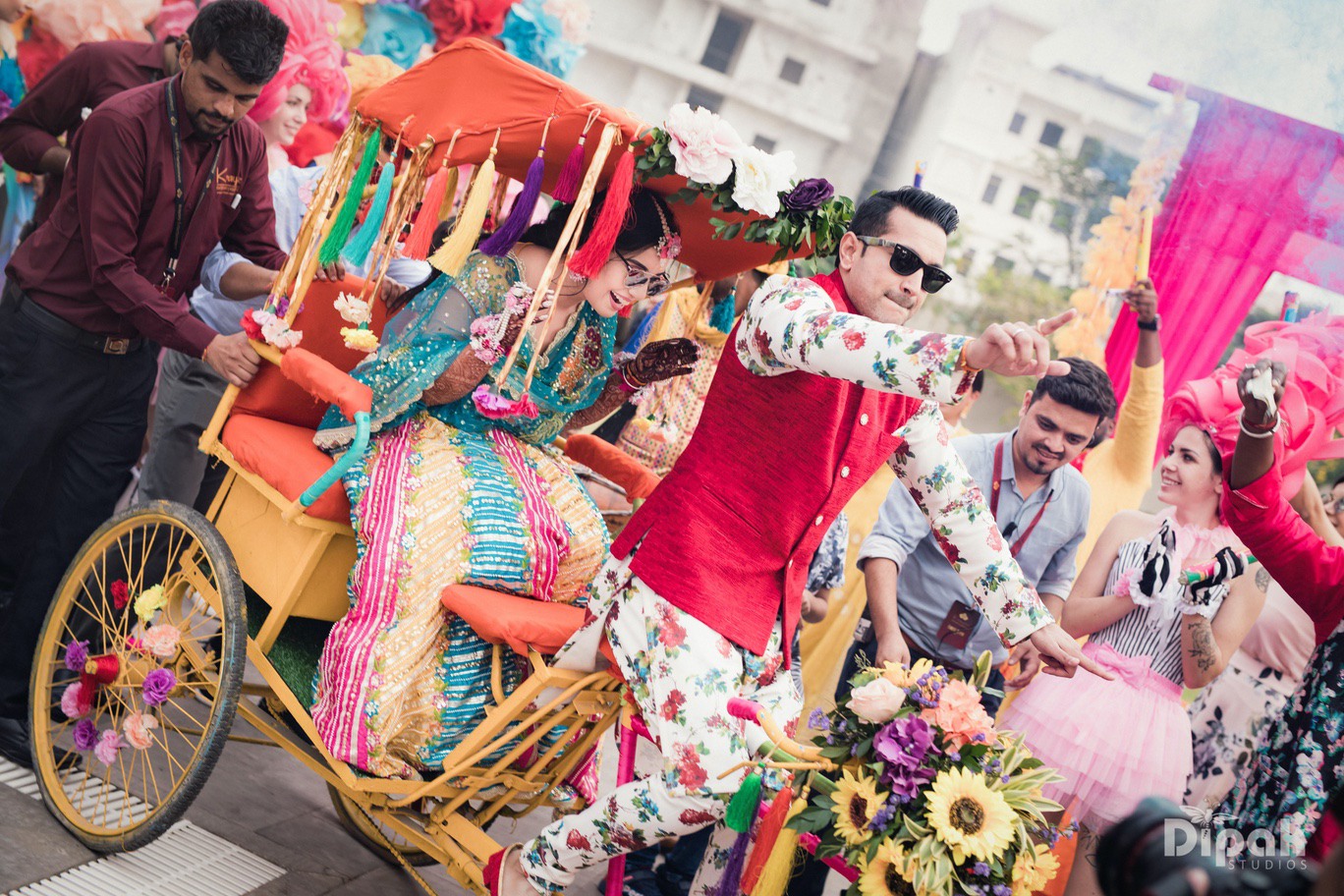 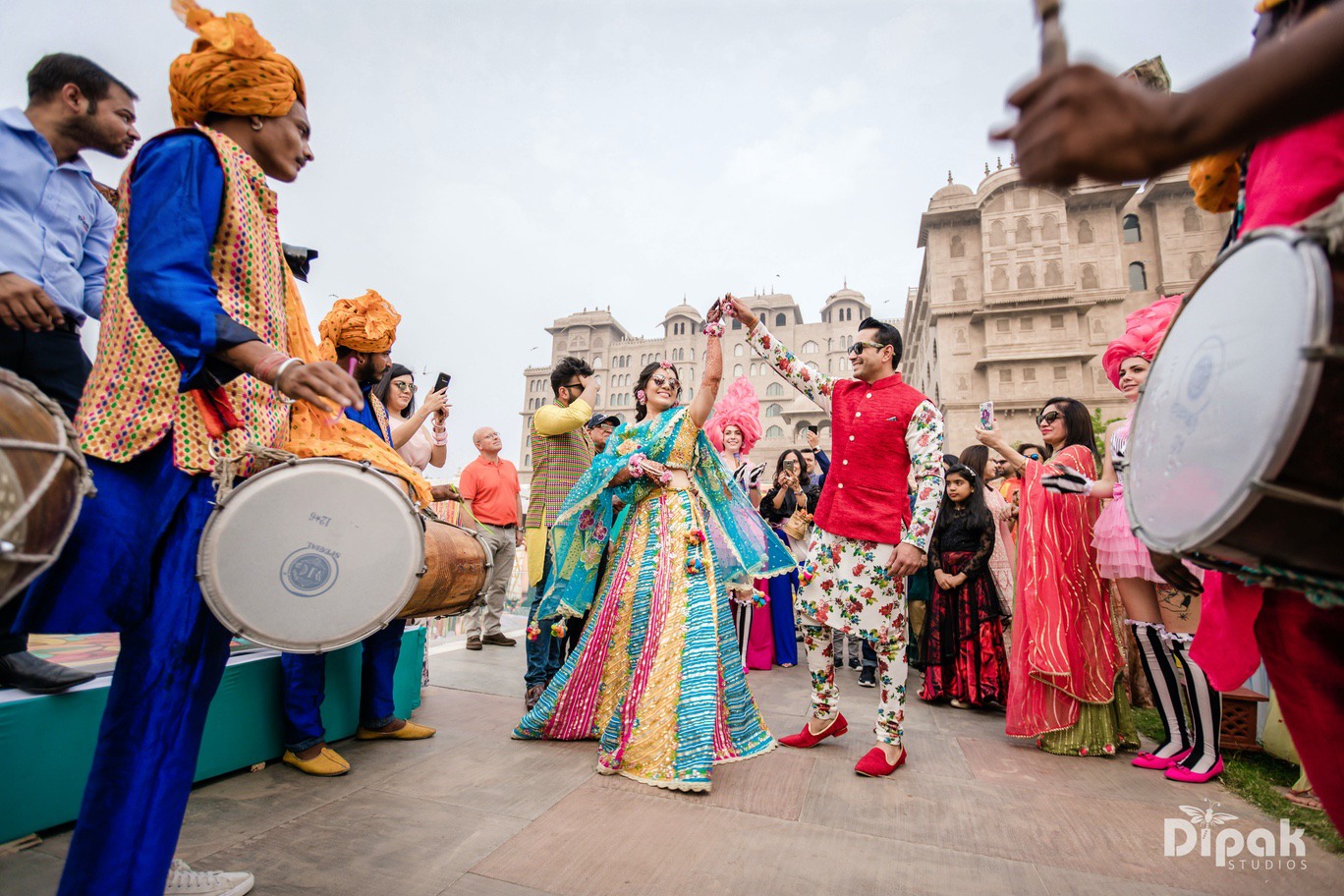 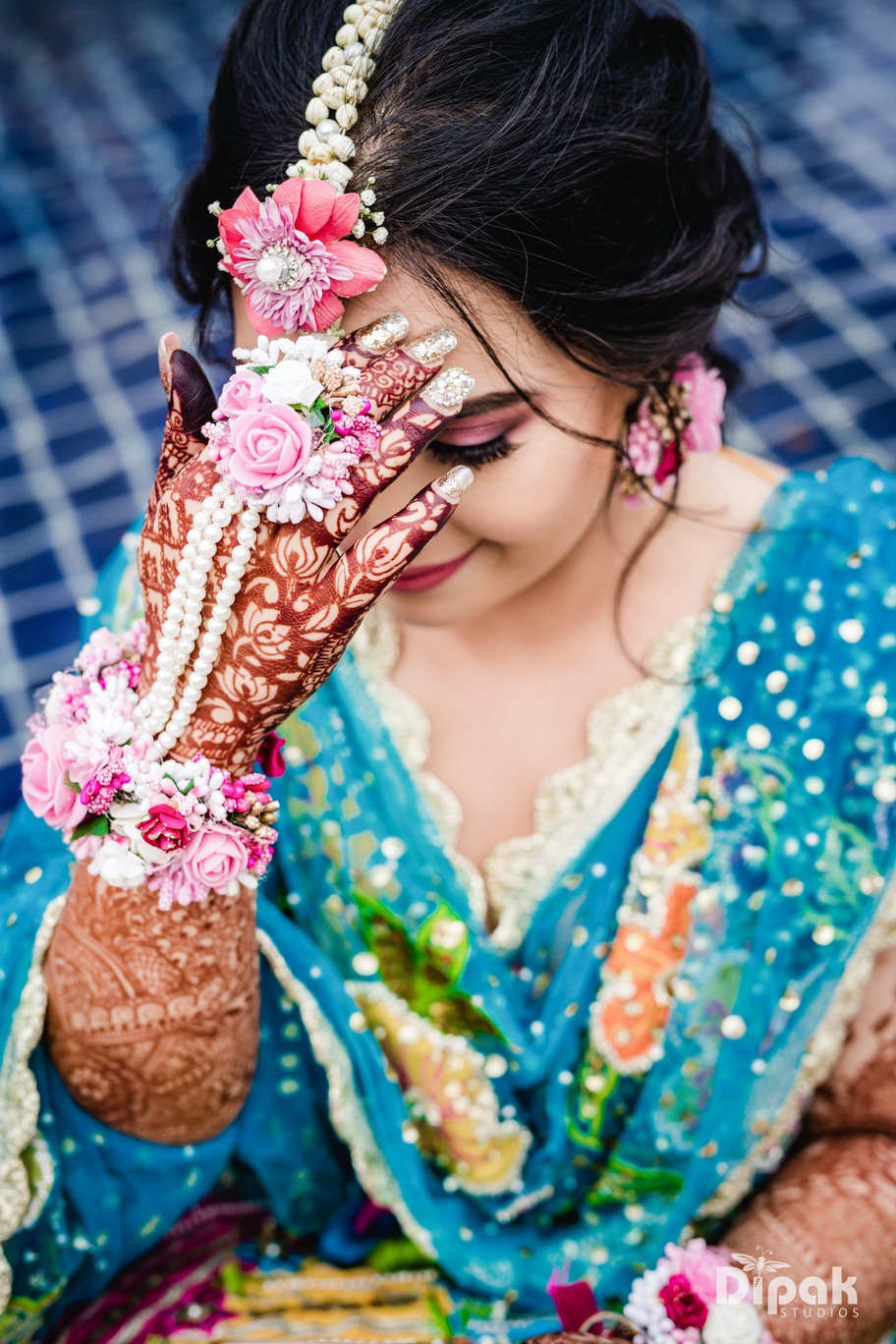 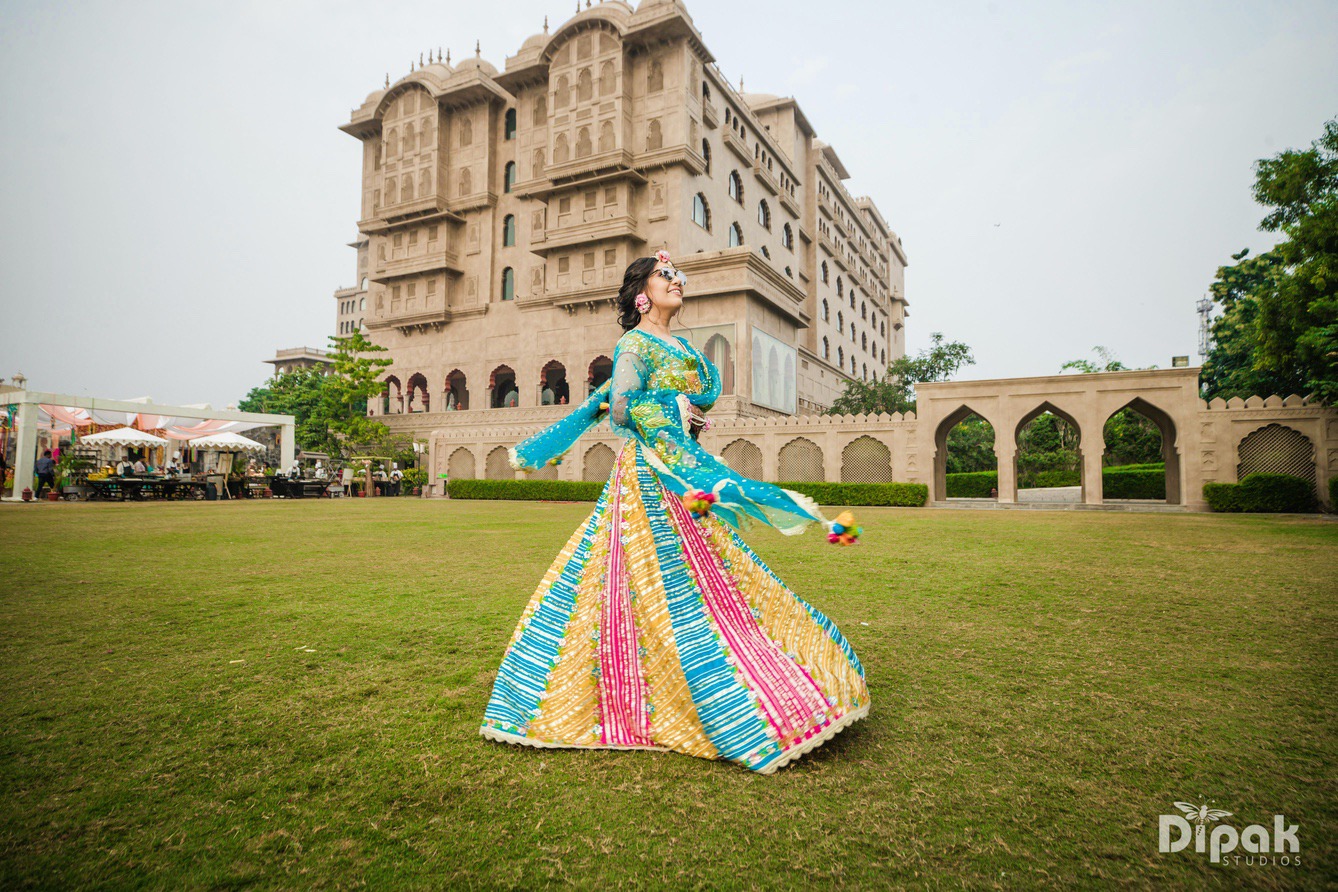 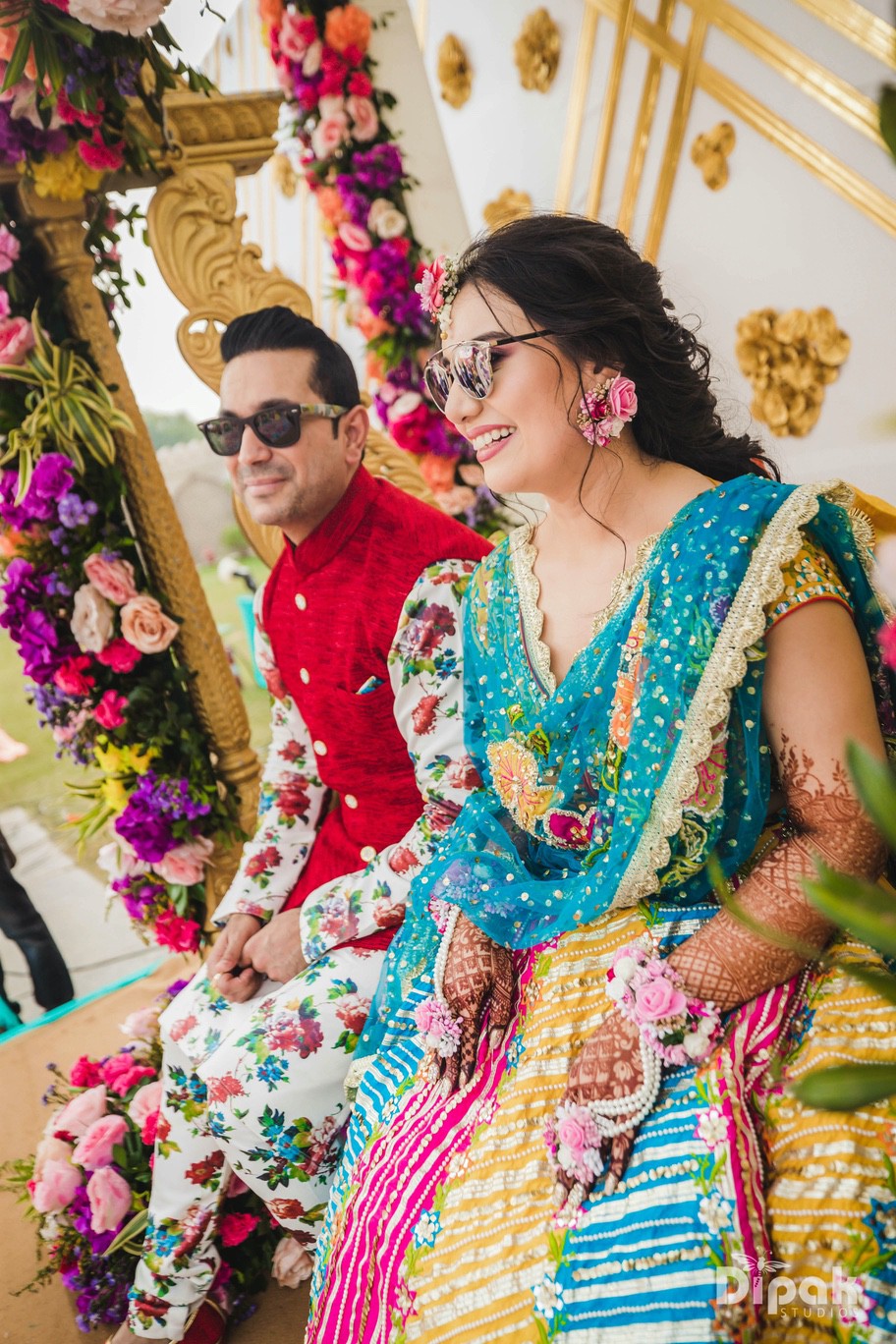 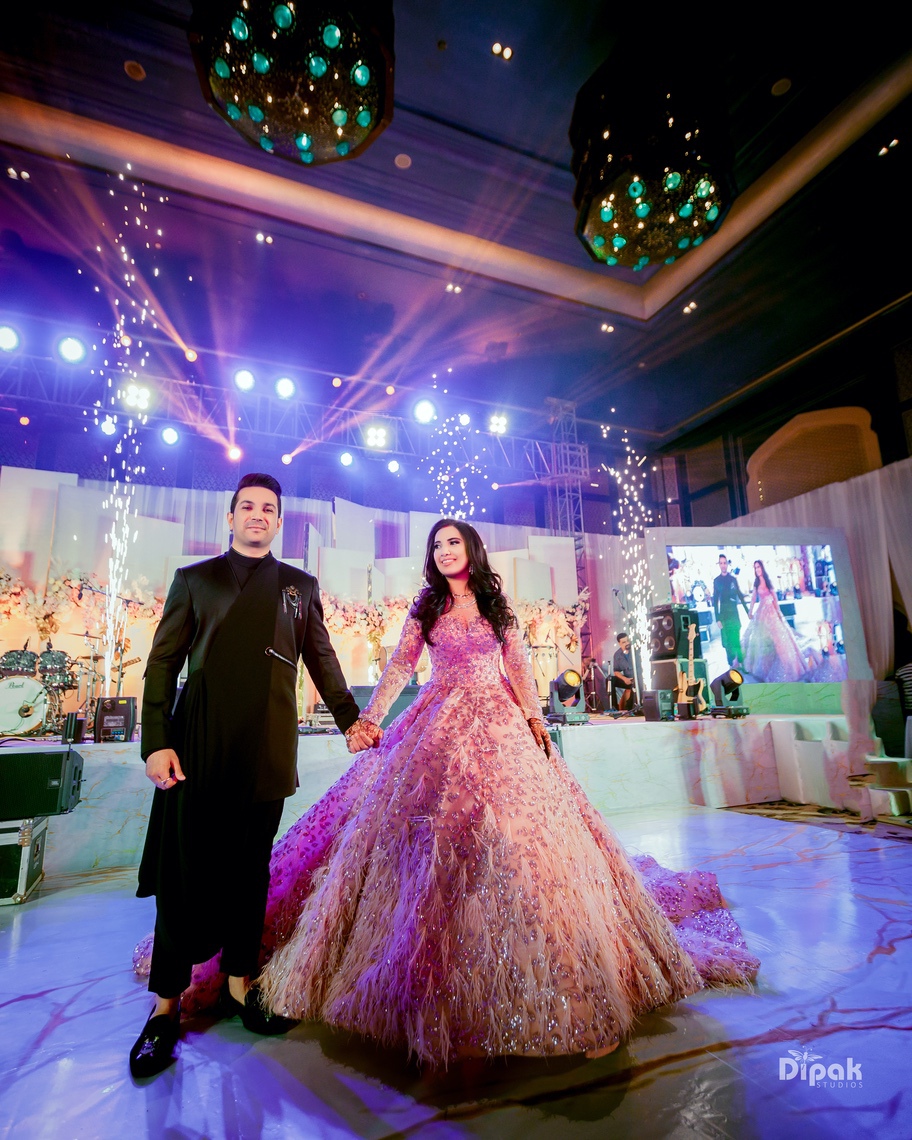 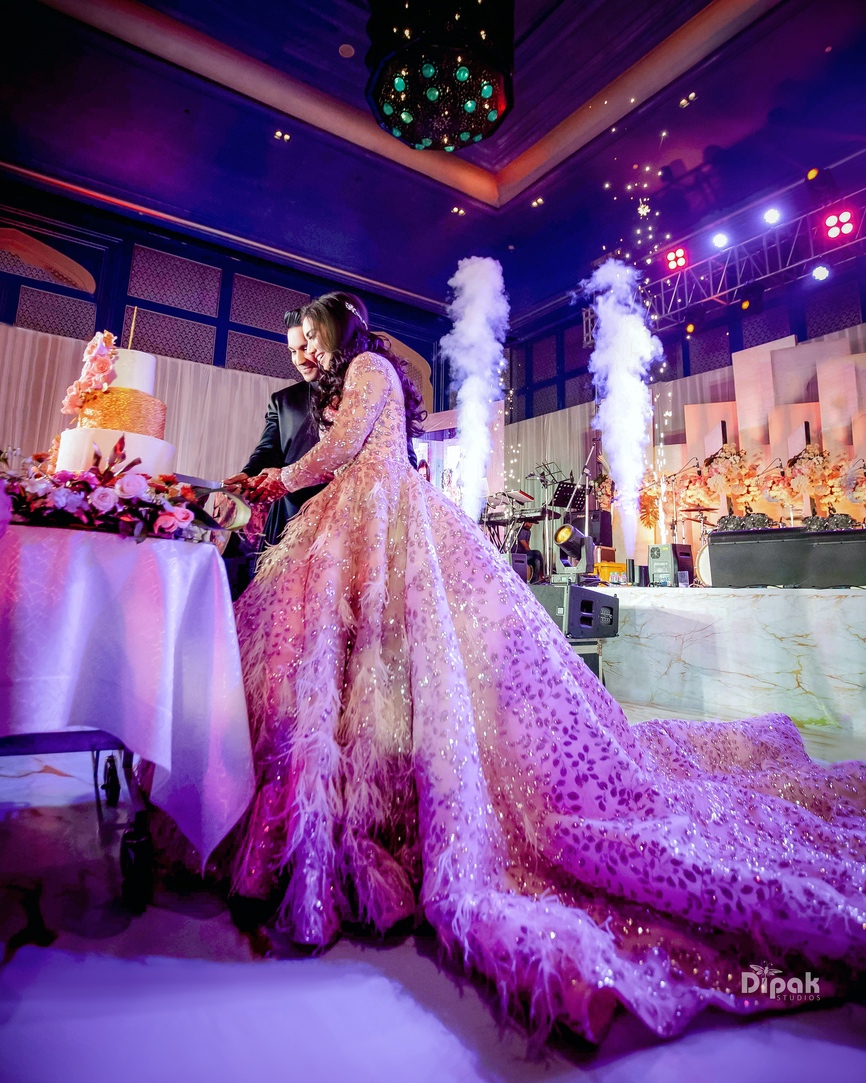 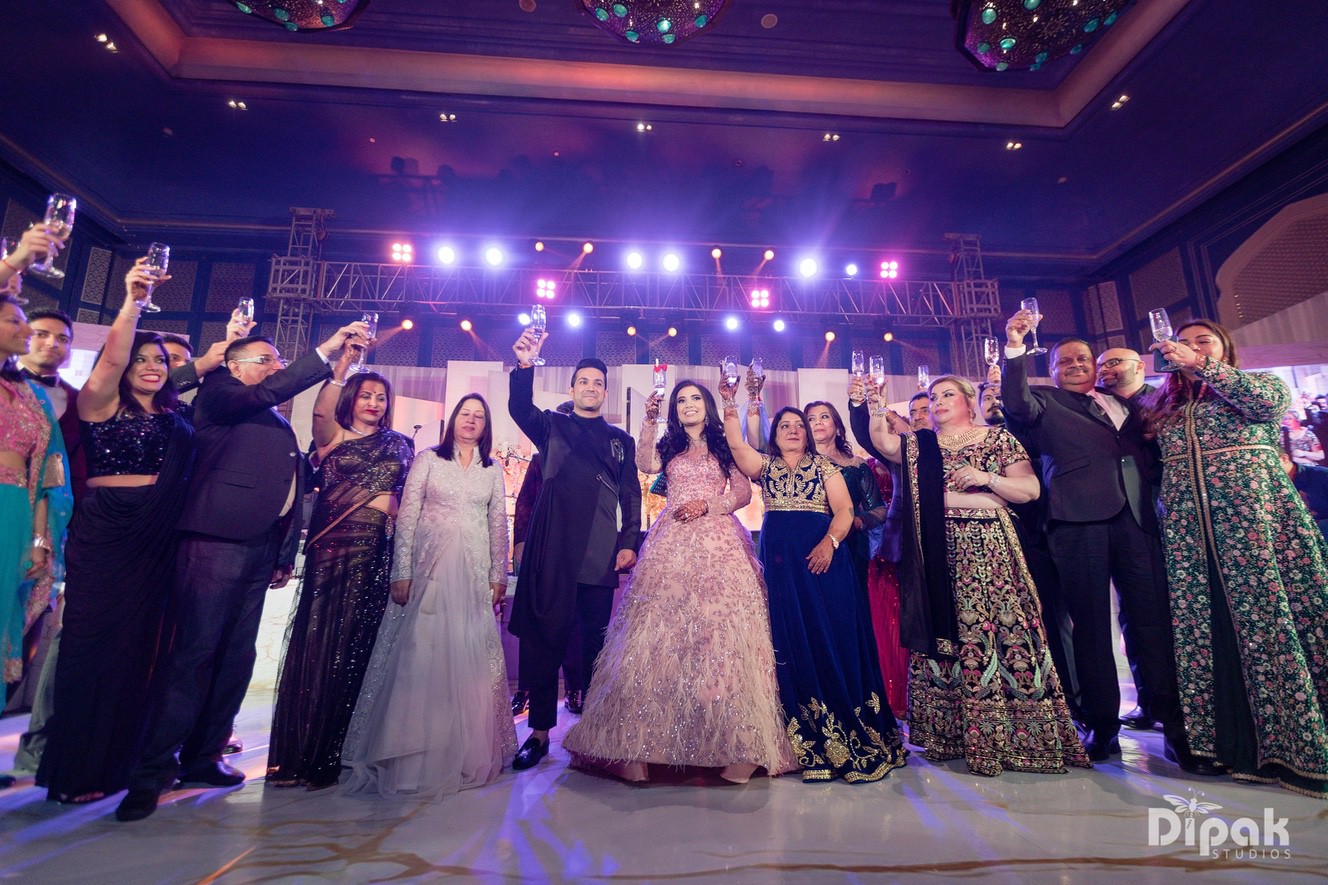 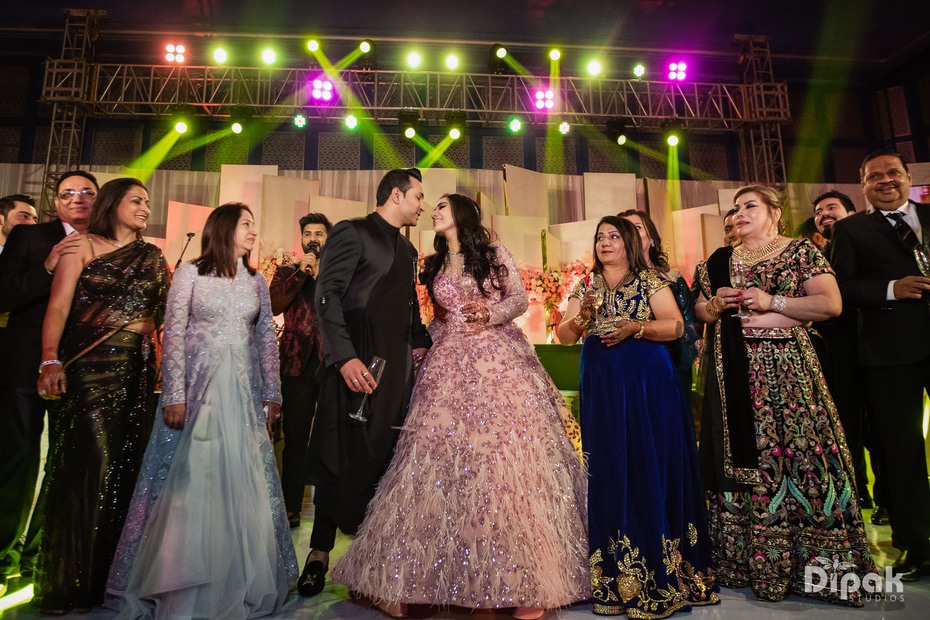 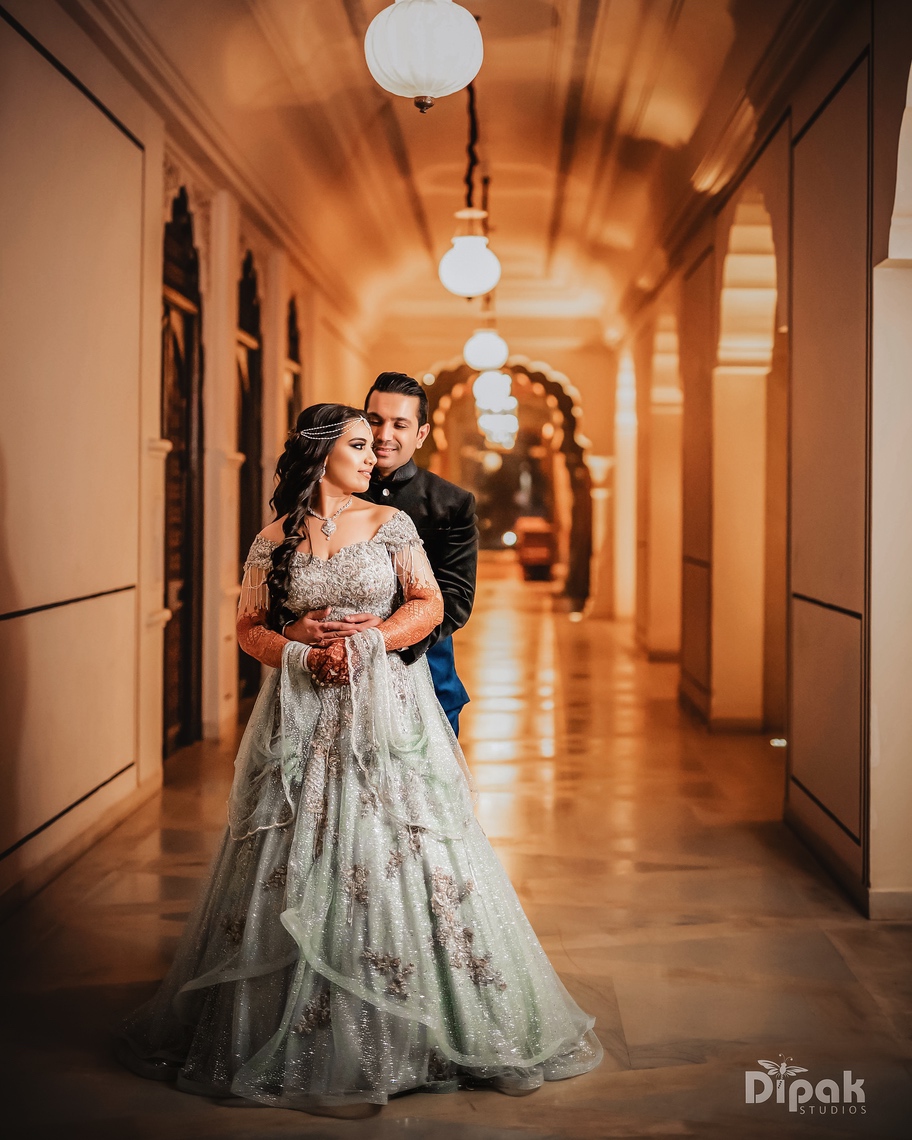 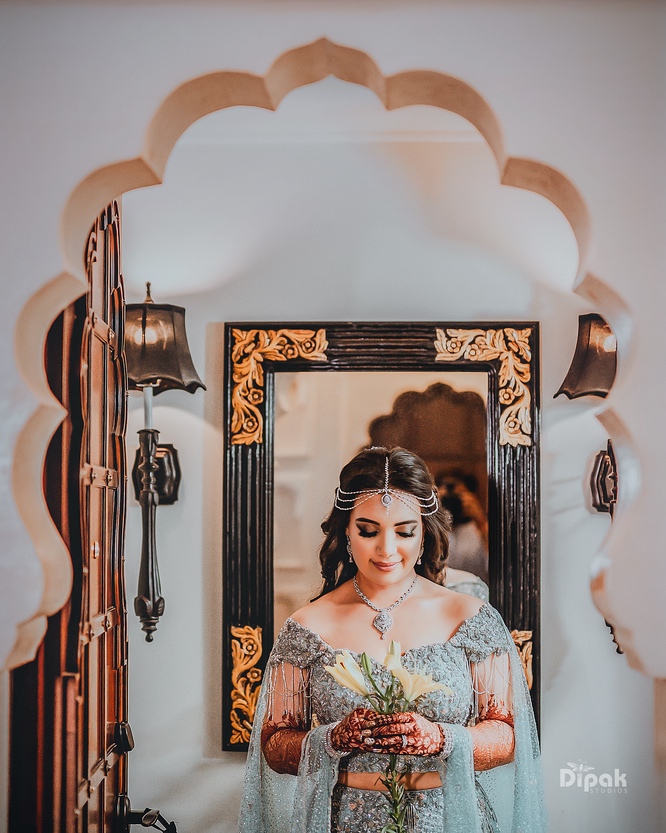 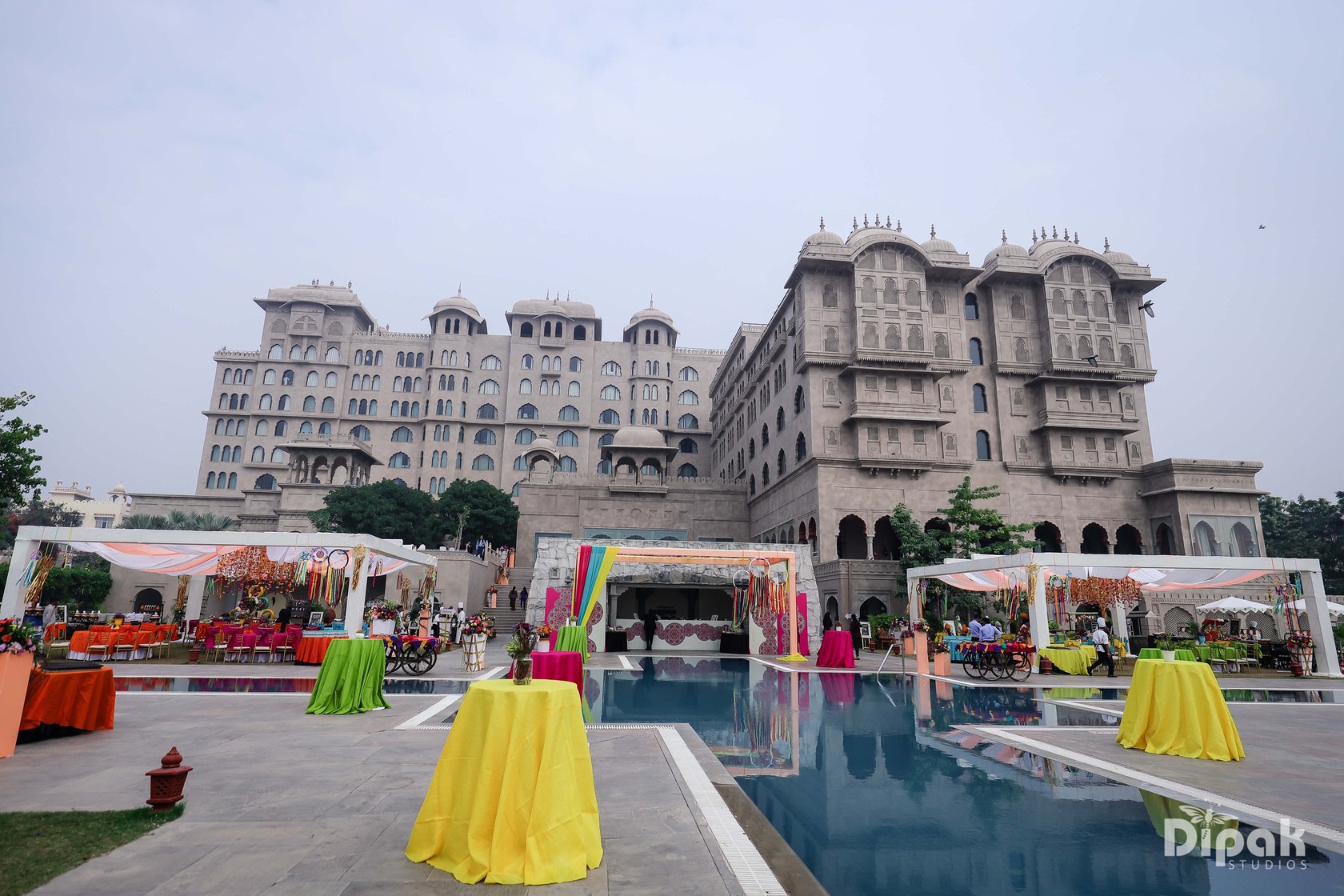 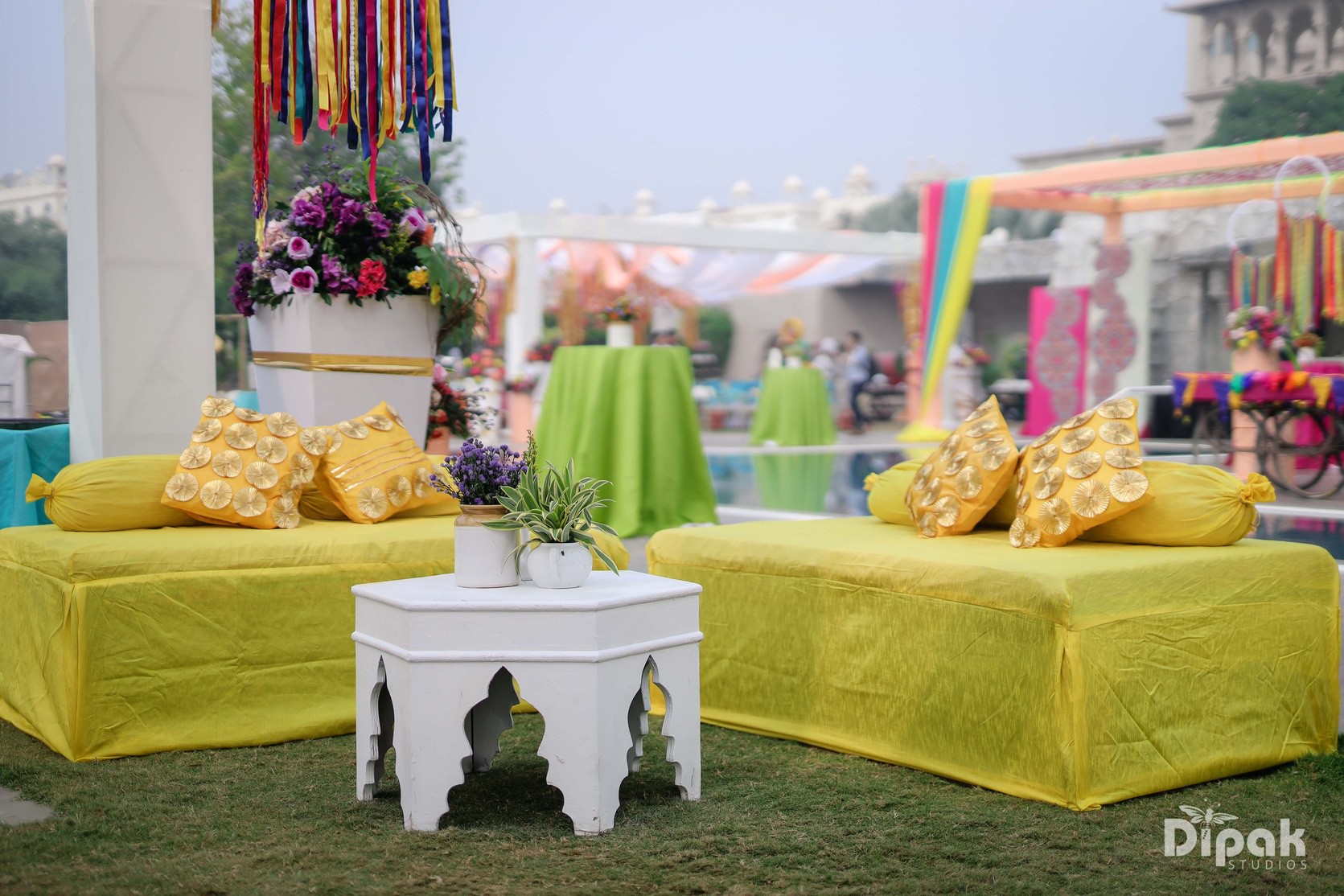 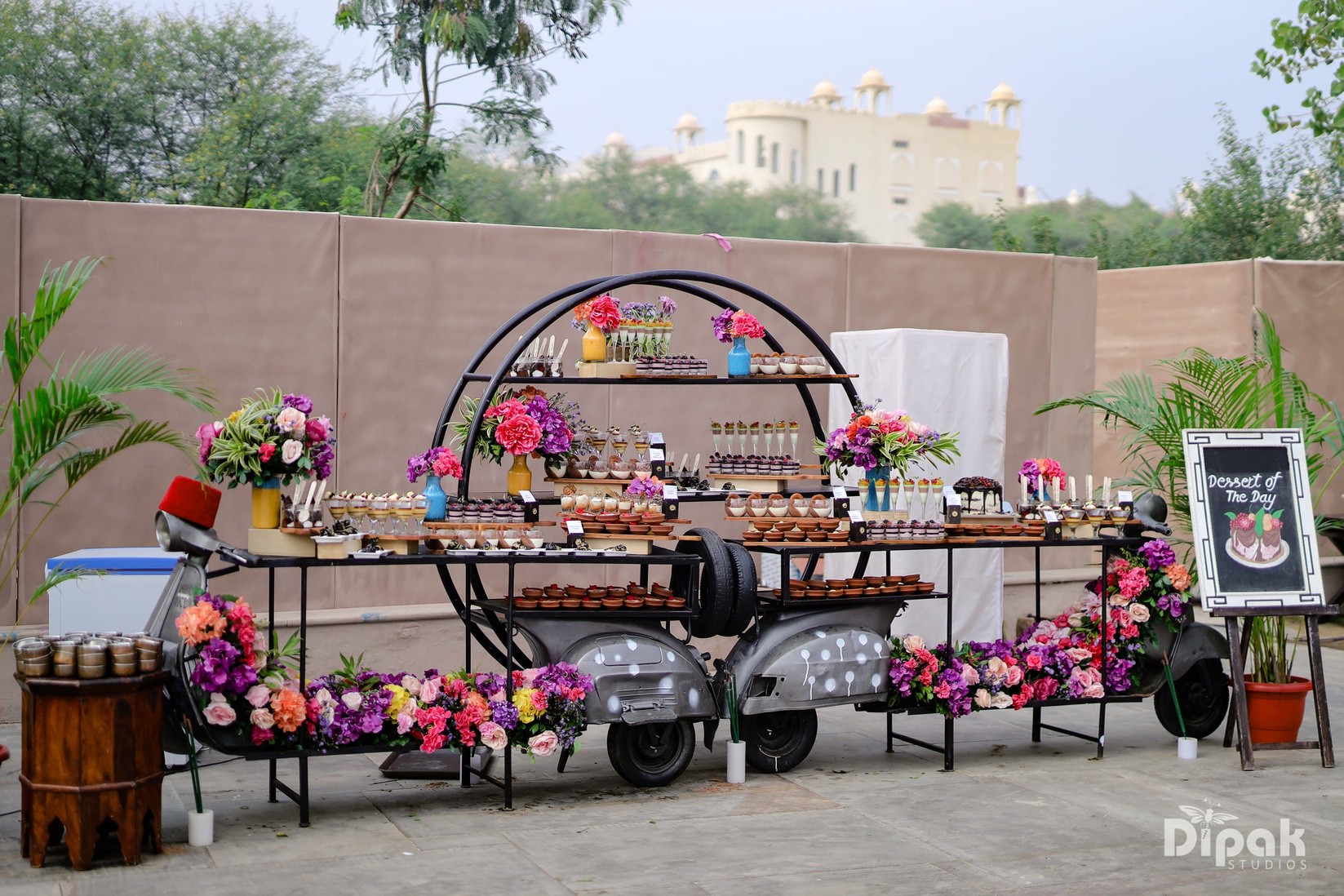 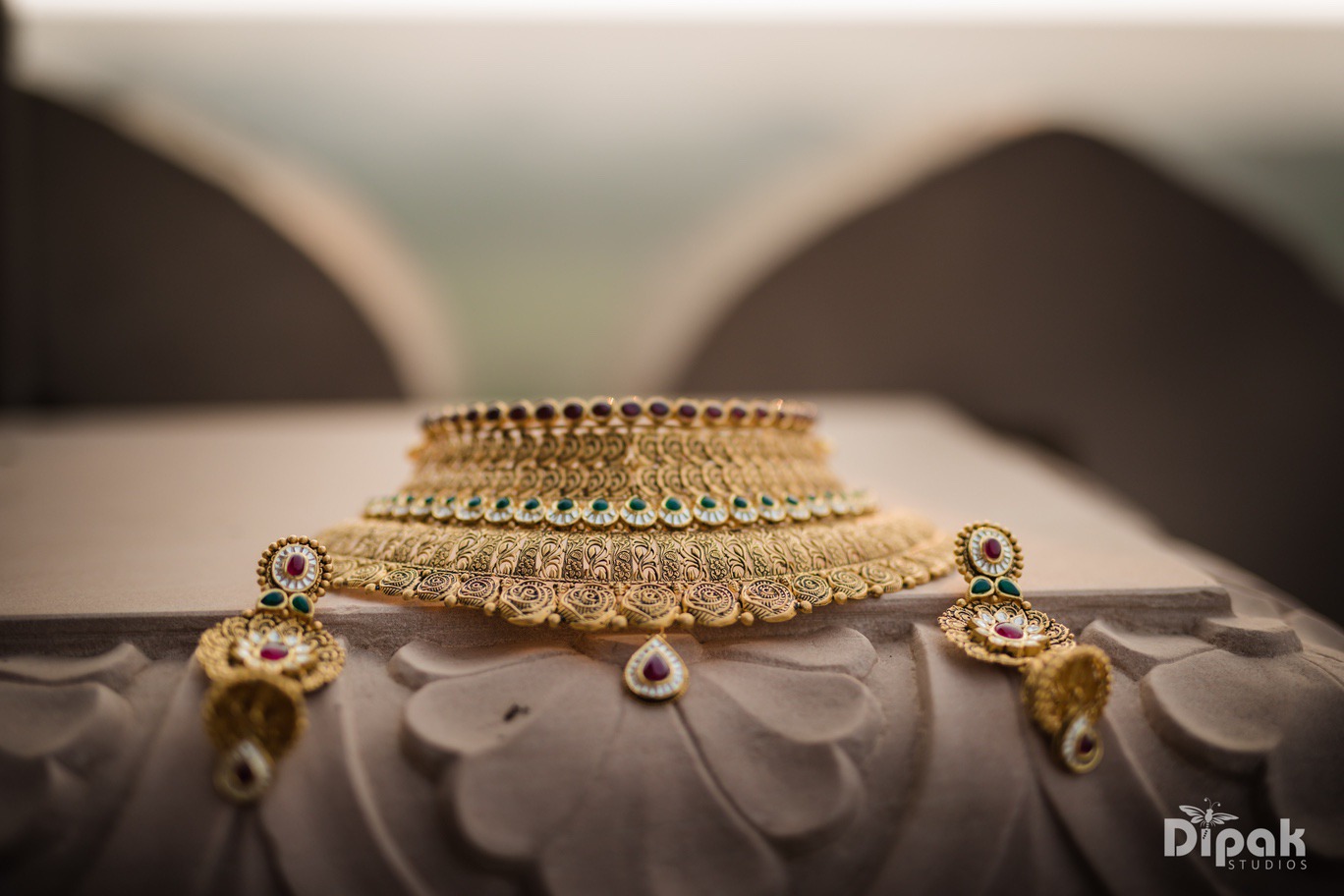 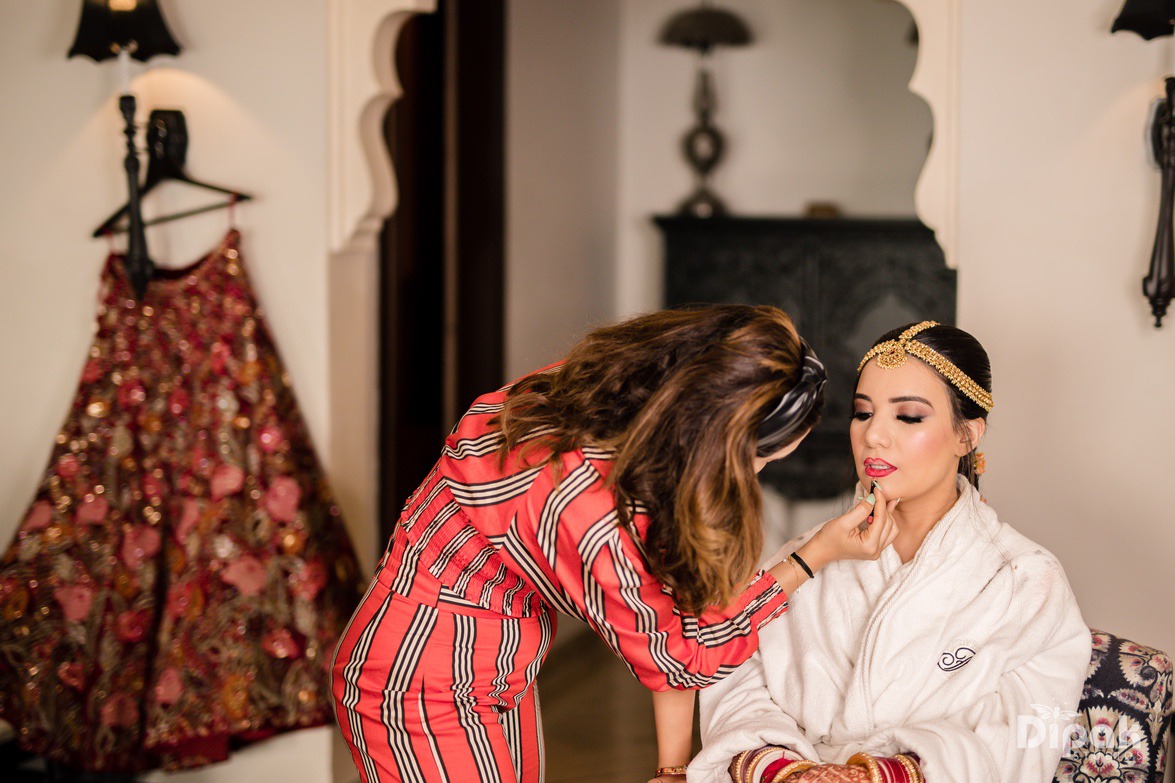 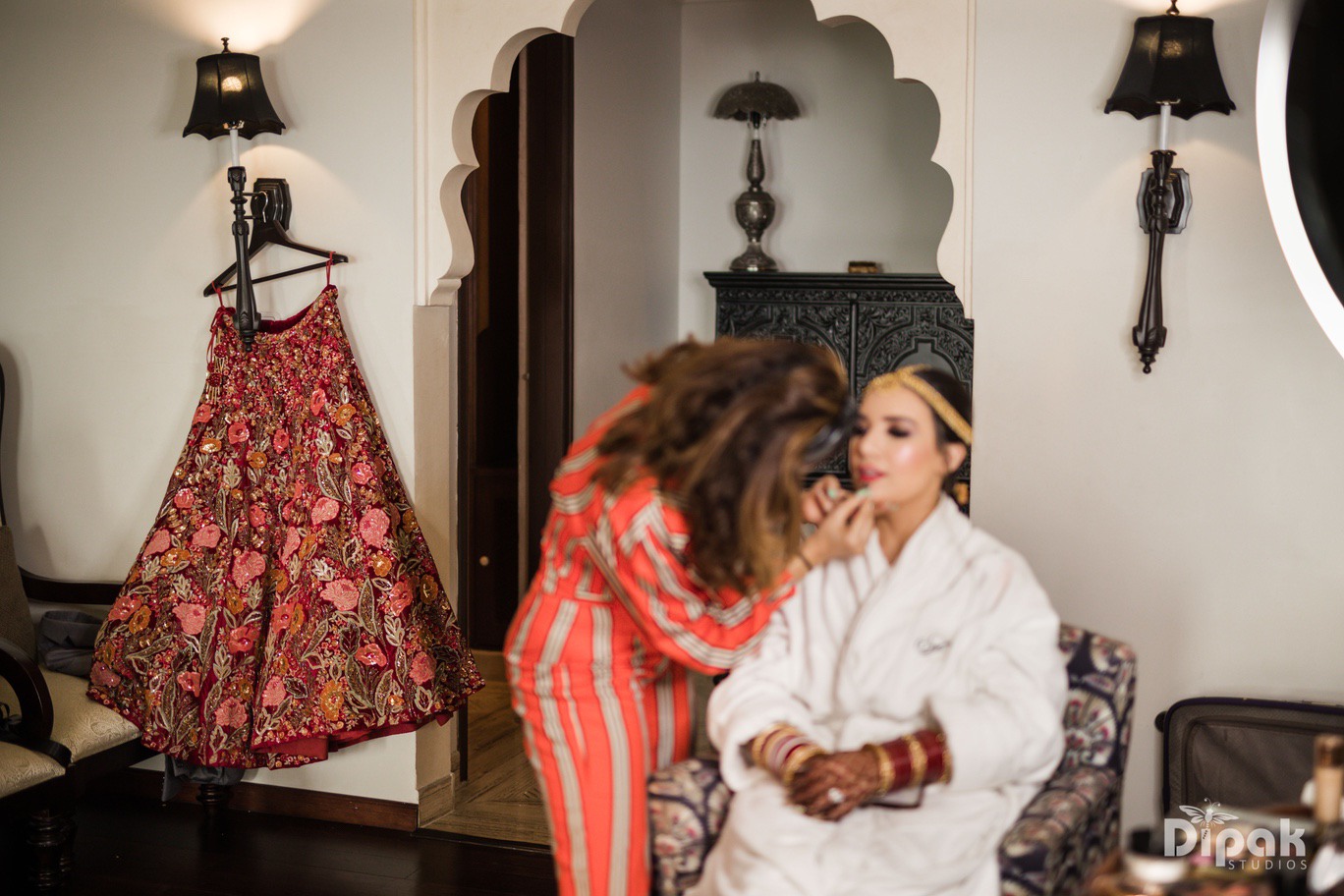 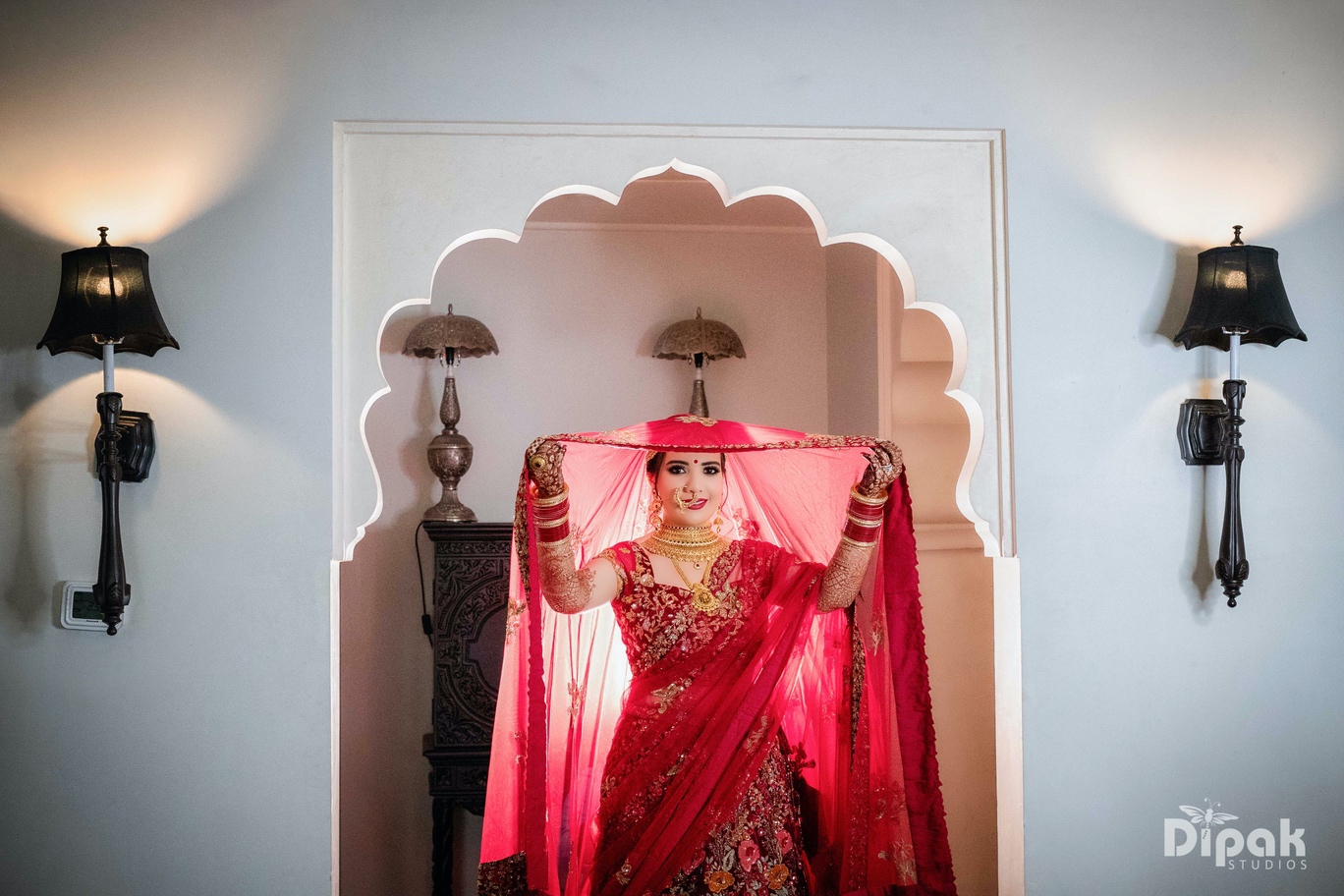 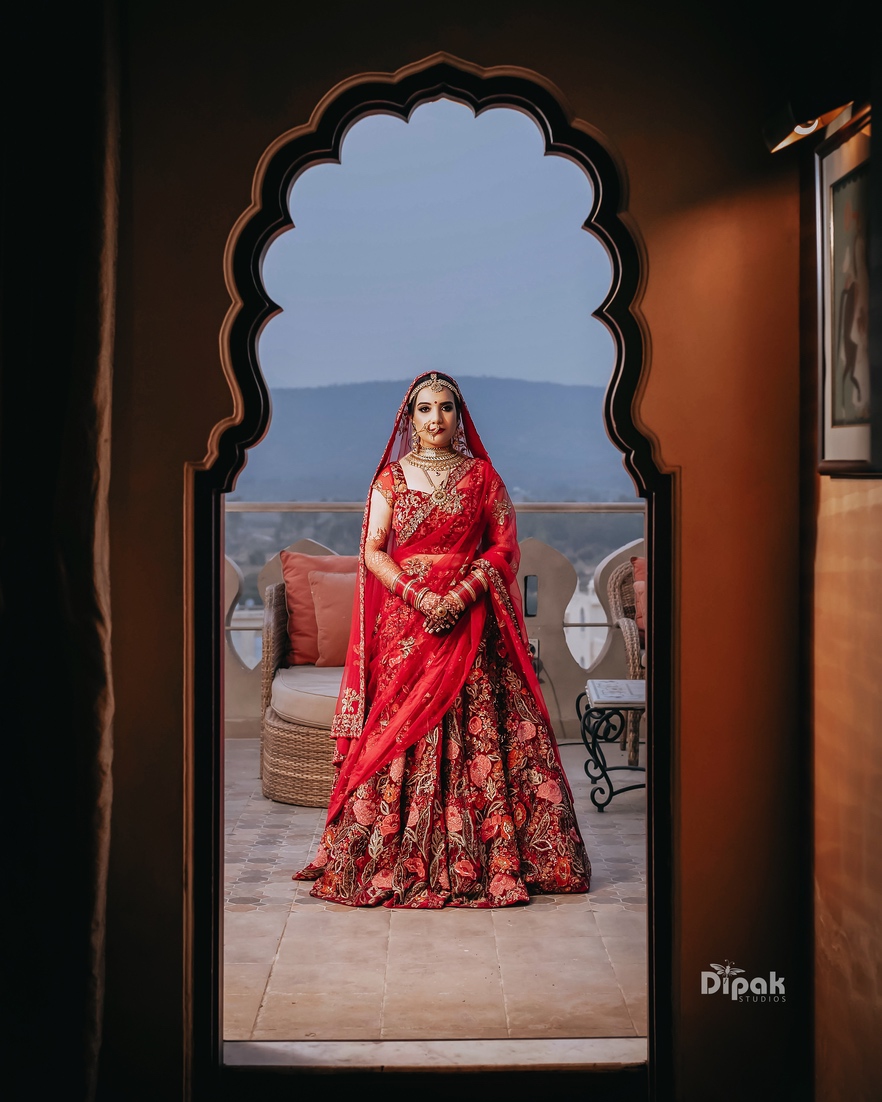 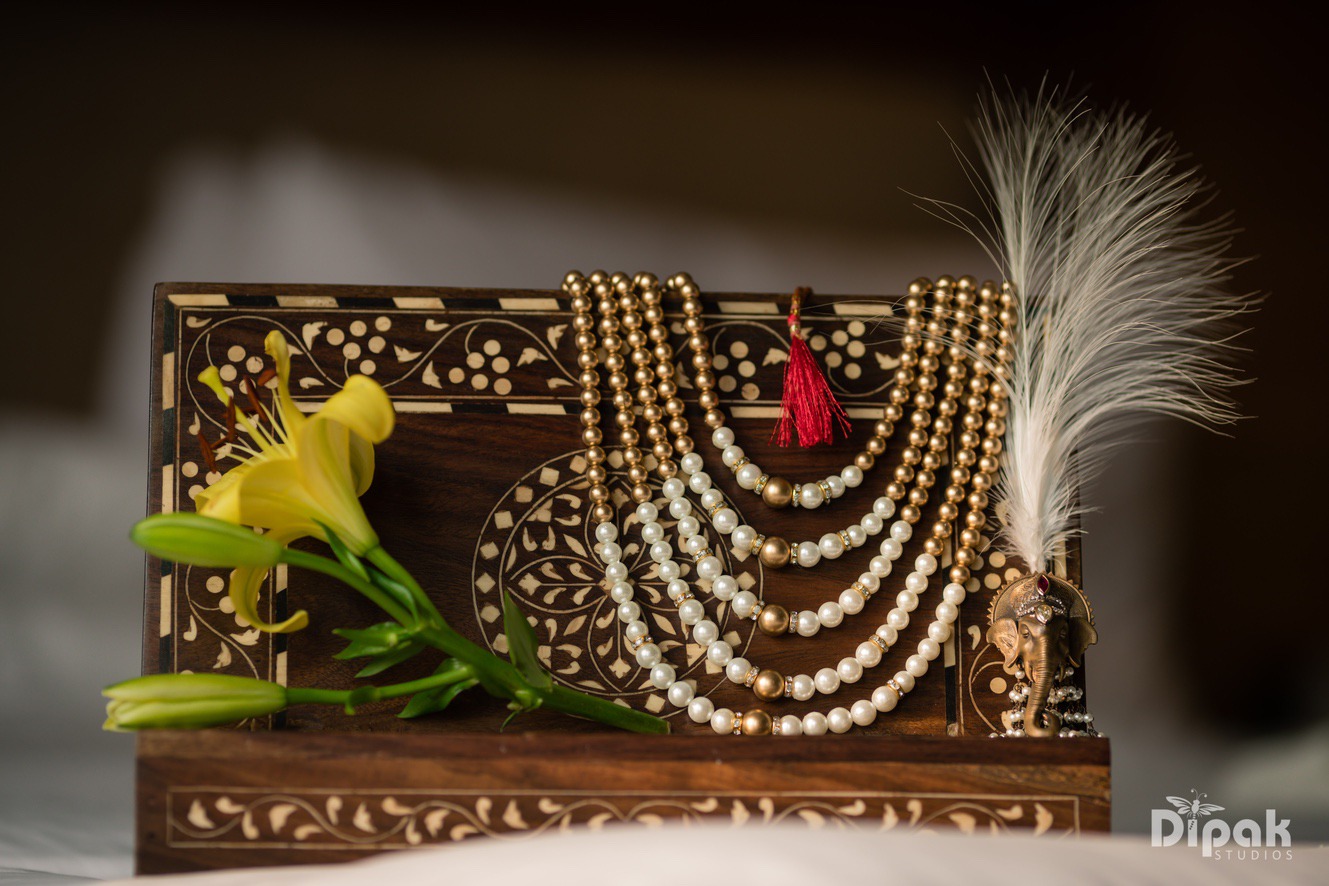 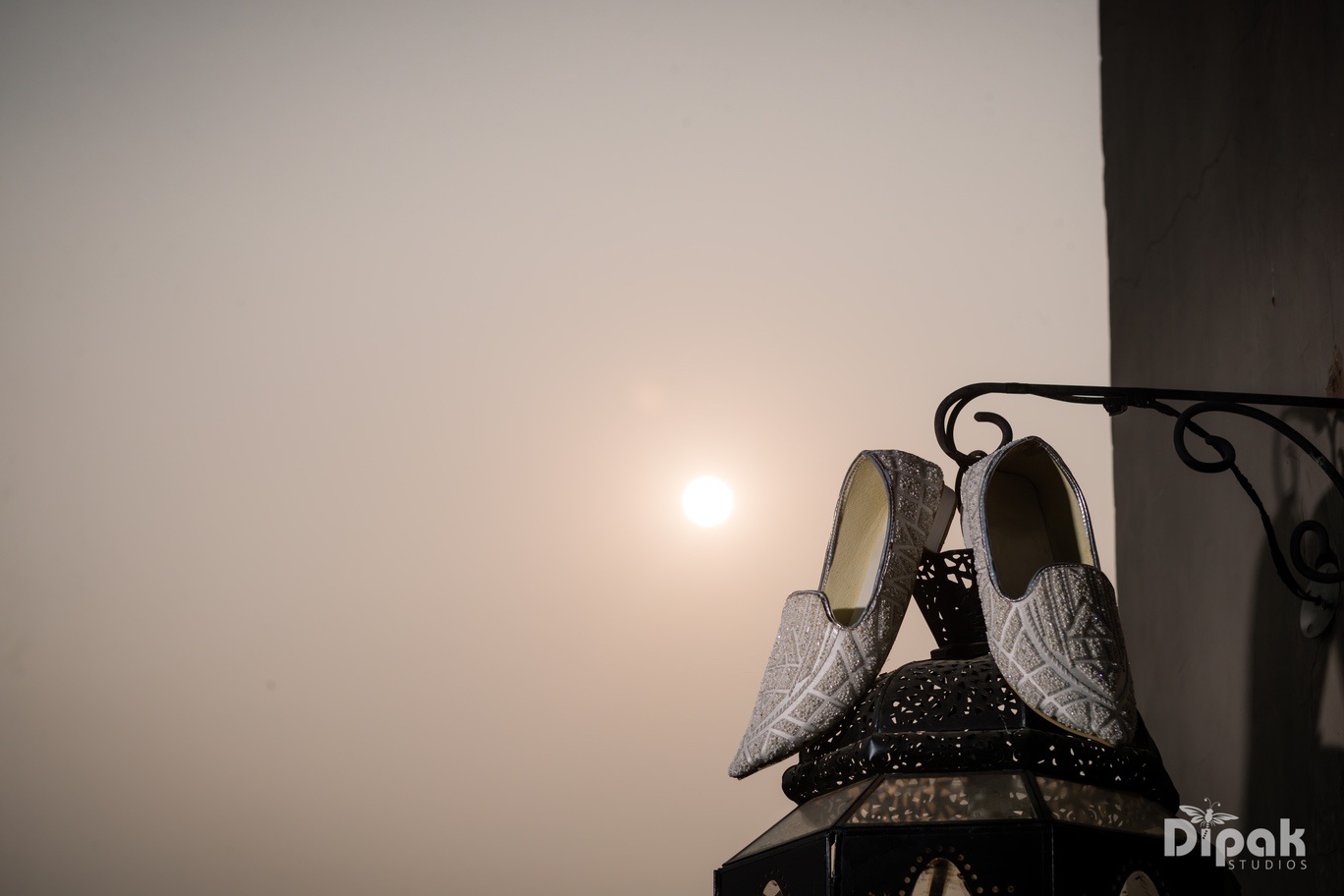 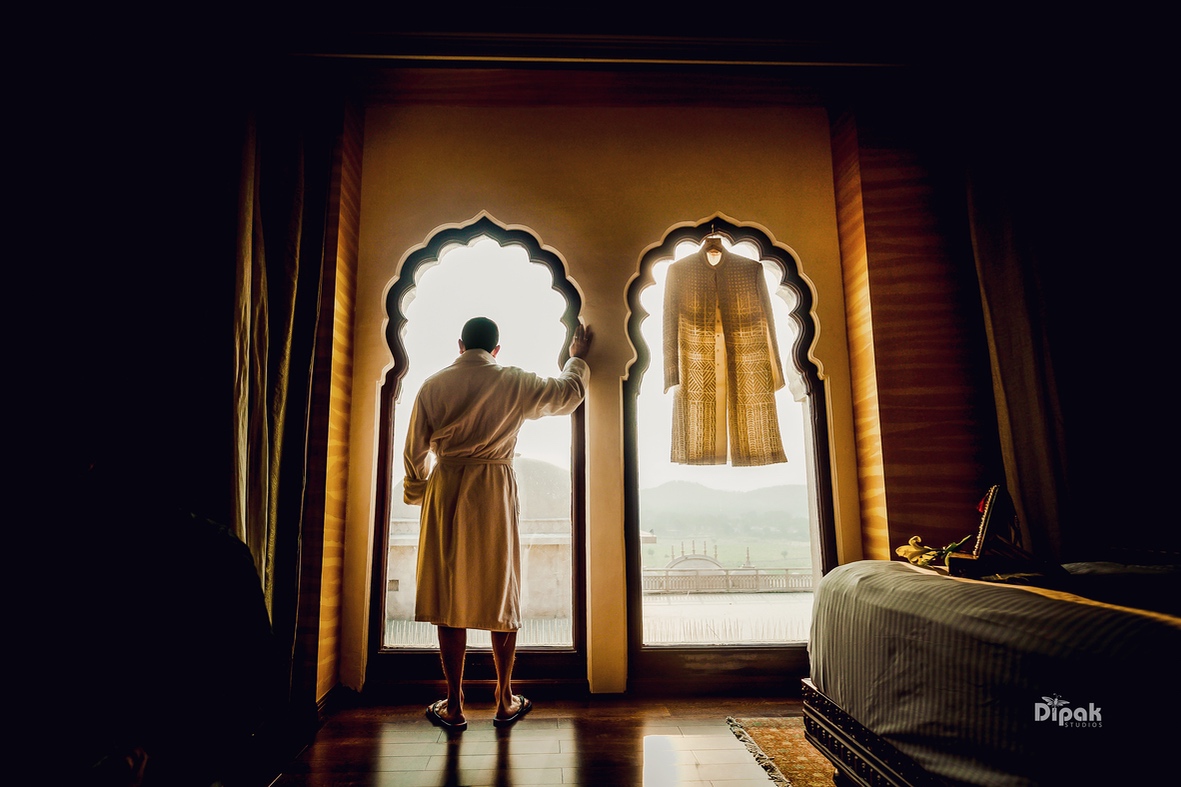 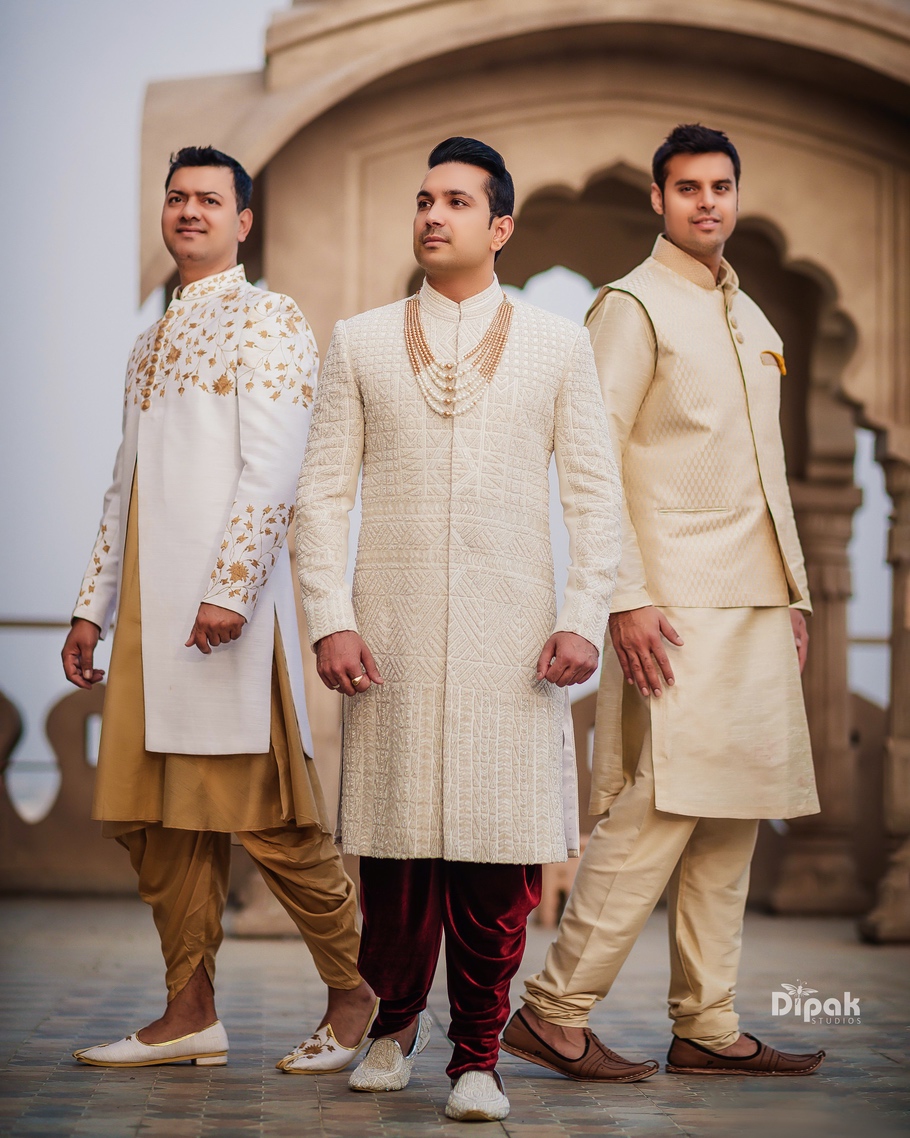